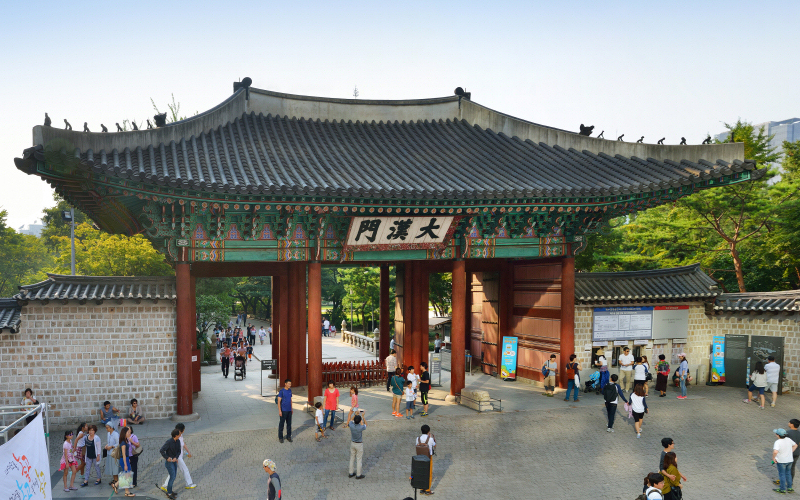 Daehanmun Gate is currently the main gate of Deoksugung Palace. This gate was originally called Daeanmun, but its name was changed to Daehanmun when it was rebuilt in 1906. It used to be located further to the front. But as the road was expanded, it fell back to today's position. Originally the east gate, it became the main gate exceptionally, as the maingates of royal palaces were usually located in the south. This was because people often used this gate from the expanded road. 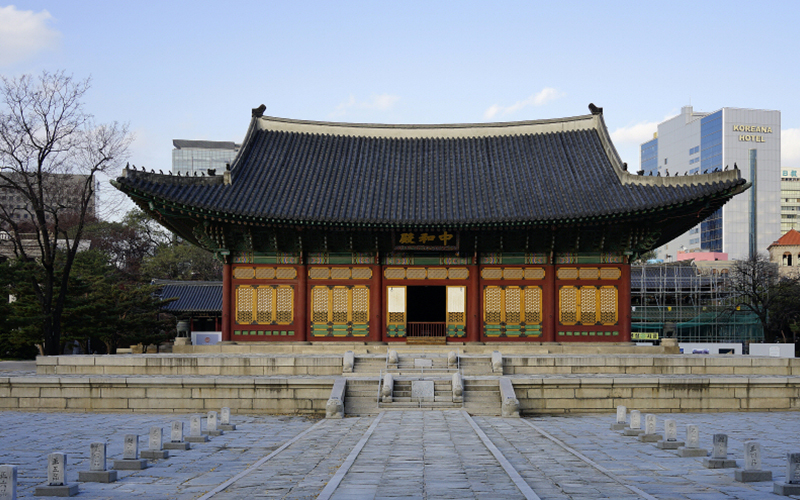 Junghwajeon Hall is the main hall of Deoksugung Palace. It was the hall in which state affairs were conducted, official meetings held, and foreign envoys received. Originally a two-story building, it was rebuilt in 1906 as an one-story building.

Now let's look inside the Junghwajeon Hall. Can you see the throne between the pillars? Behind it, there is a folding screen featuring the sun, the moon, and five mountains called Irwoloakdo. These expressed a wish for the nation, which was ruled by the emperor, to be prosperous forever. It was taken wherever the emperor went.

Now, please look up. You should be able to see a pair of dragons on the ceiling. They represent the authority of the emperor as well. 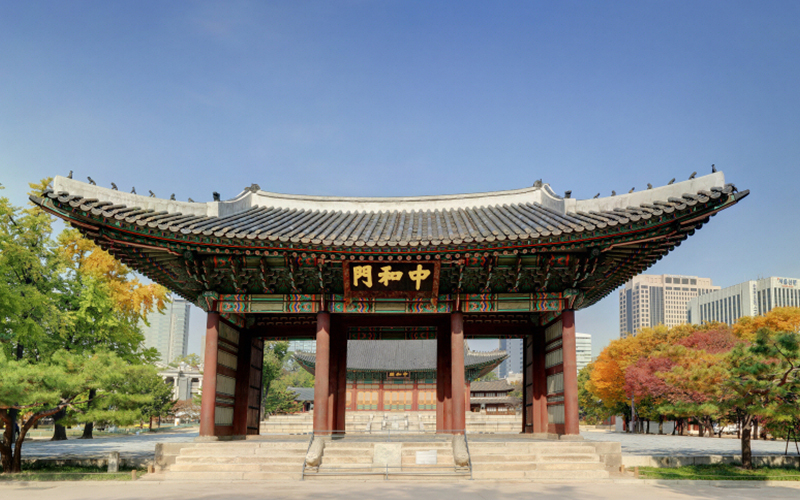 This is the Junghwamun Gate, the main entrance to the main hall. As a basic architectural feature, every building has its own entrance, and people can only enter the building through the gate. However, as you can see, people can enter from any direction, which means that the corridor surrounding the courtyard has been destroyed. You can see its remains on your right-hand side.

Now let's look inside the Junghwajeon Hall. Can you see the throne between the pillars Behind it, there is a folding screen featuring the sun, the moon, and five mountains called Irwoloakdo. These expressed a wish for the nation, which was ruled by the emperor, to be prosperous forever. It was taken wherever the emperor went.

Now, please look up. You should be able to see a pair of dragons on the ceiling. They represent the authority of the emperor as well. 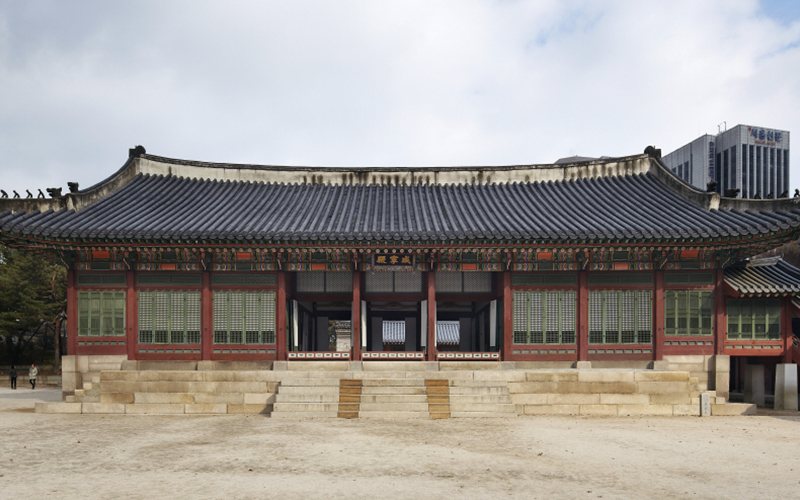 The Hamnyengjeon Hall is historically important because it is the site where the great fire broke out in 1904, and the Emperor Gojong also passed away here.

At that time, Japan was consistently trying to occupy the Great Han Empire and regarded Gojong as a barrier to achieving this aim. So they kept trying to get rid of him. Therefor, it was strongly suspected that the great fire was the result of a Japanese act of arson, and that Gojong was murdered with poison.

Officially, it was reported that the fire broke out when the heating system was being checked. However, the fire broke out at 10 pm, which was too late a time for that kind of work, and all of the important buildings of the palace buned to the ground bery quickly.

Moreover, it is also suspected that Gojong was poisoned to death by the Japanese. The sudden and regretful death of Gojong was a major contributing factor to the March 1st Independence Movement which emerged in the same year, 1919. 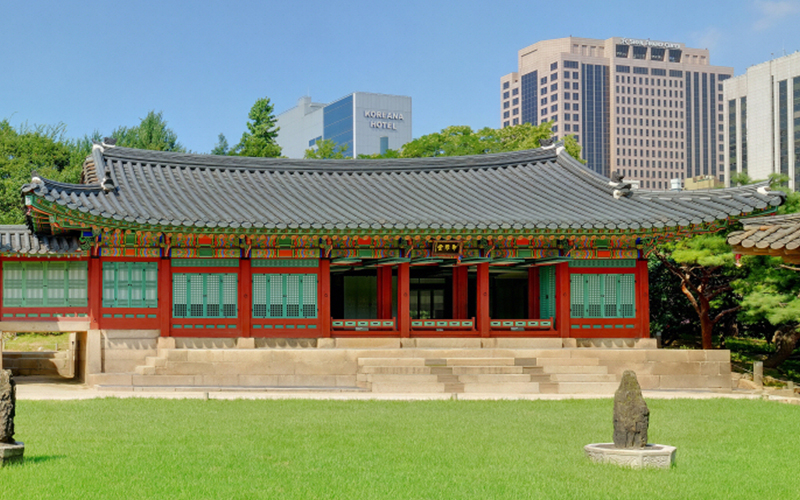 This is the Jeukjodang Hall, which literally means the house where kings ascended their throne. Historically, two kings, King Gwanghaegun and King Injo ascended the throne hrer. However, it was generally used as an ordinary office by Emperor Gojong. Because it has been used by King Seonjo, Emperor Gojong cherished this building greatly. So, when it was rebuilt, he wrote its commemorative plaque by himself. It was connected to the nextp building, Junmyeongdang Hall, by a corridor. 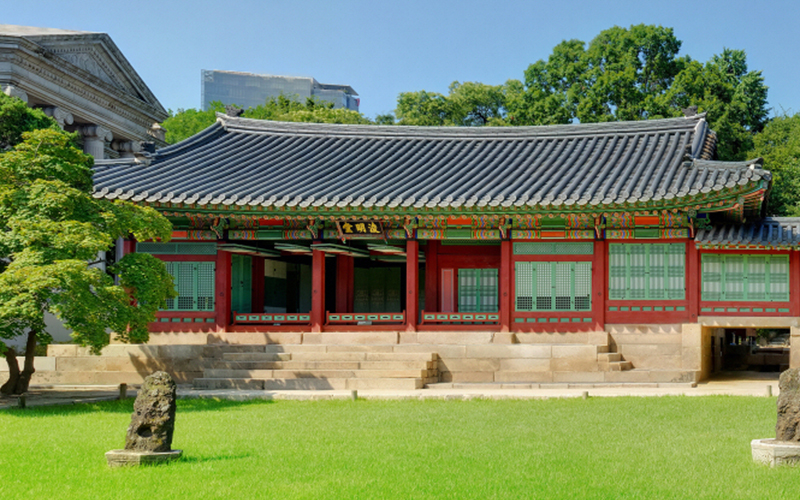 Emperor Gojong received honored guests and foreign envoys here in the Junmyeongdang Hall. Later, the portraits of Emperor Gojong and Sunjong were enshrined here. The building was once also used as a kindergarten for Princess Deokhye. She was born when Gojong turned 60 years old. This offers some proof of how considerate a father he actually was. Look at the holes where a handrail was fixed for her.

However, she led a tragic life. She was sent to Japan when she was just 1 years old, and at twenty she was forced to marry a Japanese man of noble birth. Unfortunately, she was abused and ultimately divorced by him. She could only get back to Korea in th 1960's, and she remained in a mental hospital for a while. 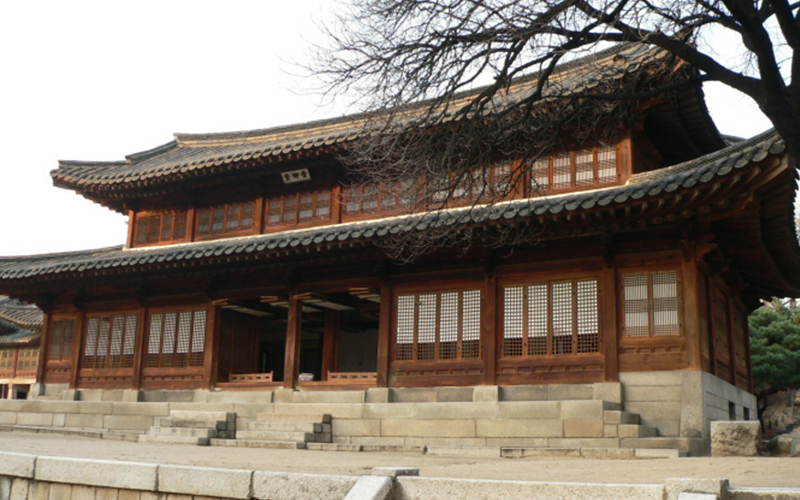 Seogeodang is the only building at Deoksugung with a two-tiered roof. Because it is not painted, Seogeodang resembles a typical house of that time. Queen inmok, wife of king Seonjo who moved here during the Japanese invasion at the end of the 16th contury, was confined in Seogeodang for ten years. This move was used by the faction opposing Gwanghaegun as a pretext for his dethronement.

After King Injo assumed the throne in 1623, most of the buildings and land were returned to their original owners, but Jeukjodang and Seogeodang were preserved. 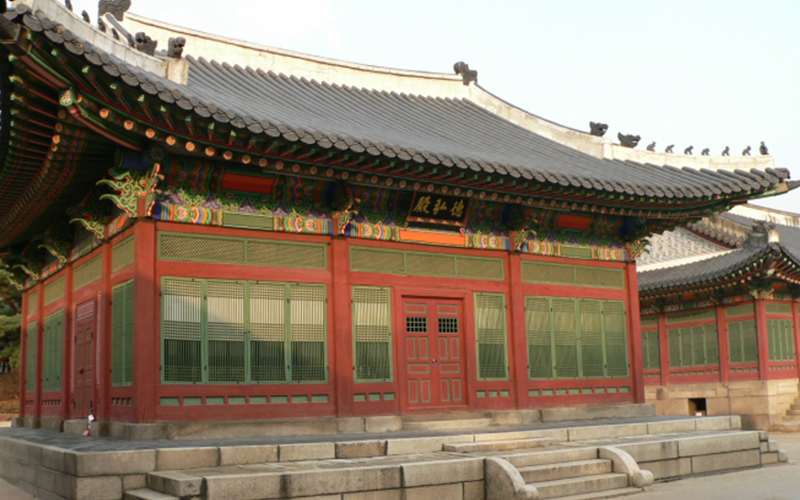 The Deokhongjeon Hall is one of the most recent buildings, built in 1911. Let's take a look inside. You can see elements of the transition to modern society in here. Usually Korean-style buildings were built in a rectangular shape, but this is almost square. On the ceiling, there is a light which was first installed at Hyeongbokgung Palace in 1887, Two years before China and Japan acquired one, and just 8 years after Edison invented it. The Emperor Gojong received foreign envoys here. 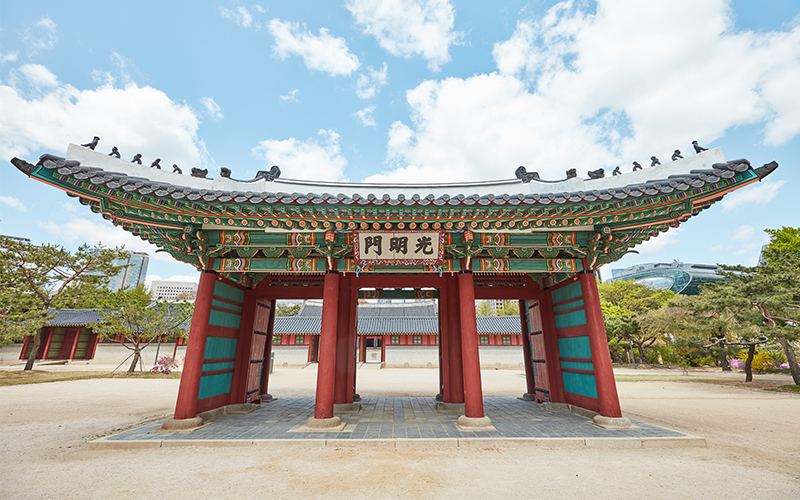 Gwangmyeongmun Gate has been moved to its original position. We will revise the contents as soon as possible. 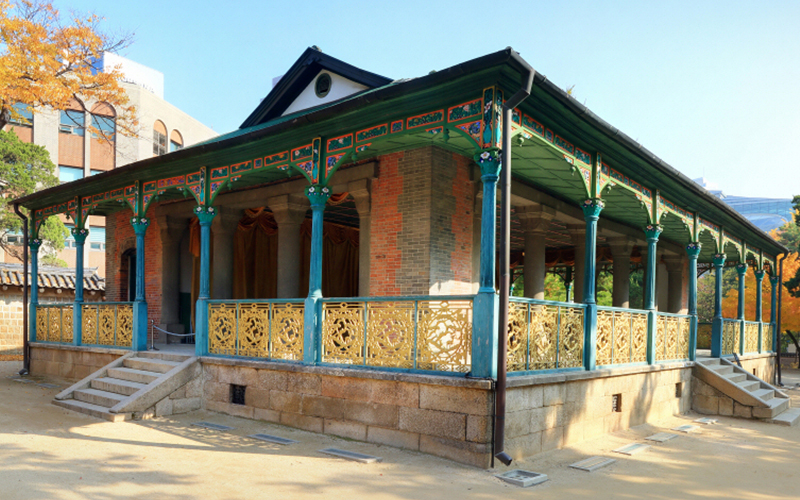 This called the Jeonggwanheon, which can be translated as the "place from which to watch the garden silently". It was built in 1900, and was the first example of European architecture ever built in a royal palace. The Emperor Gojong liked to rest here, drinking tea, listening to music, and even having a party.
During the Japanese occupation, it was used as a cafeteria, and invitably lost its original features.

This building is very different from the others. It was built by a Russian architect named Sabatin. However, if you take a closer look at the building, you will see that he had a certain knowledge of traditional Korean architecture. Please look at the columns. It displays the traditional pattern of deer with bullocho, a mythical herb and elixir of eternal youth, as well as pine trees symbolizing longevity, and dragons for the emperor. Now try to find the bats if you can! Unlike in Western cultures, Asian believed that bats bring good fortune because the Chinese character for a bat sounds very similar to the character for fortune and because they breed a lot.

Now take a look at the florally patterned wall made of orange and yellow bricks. The pattern represented a wish for longevity as well. You can see the best example of this at Gyeongbokgung Palace. 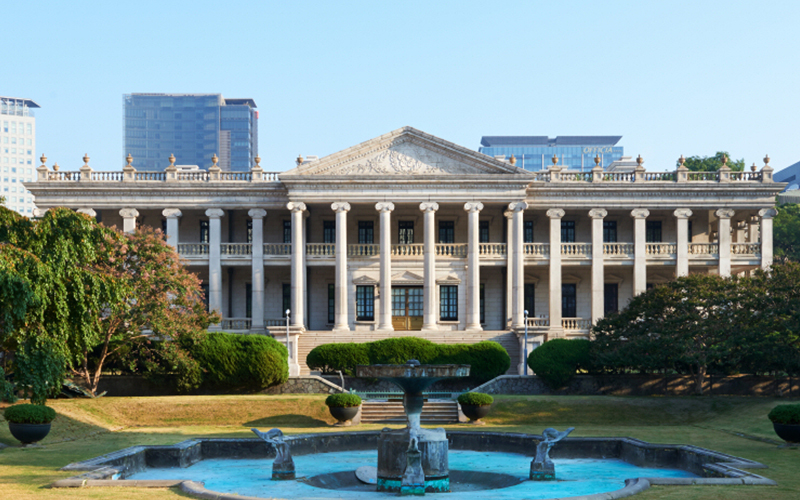 Now you can see the Seokjojen Hall, which means the stone house. As a Western style, it is not quite in harmony with the other buildings. It was designed by a British architect, Harding. In the case of the traditional buildings, each had its own purpose and a specific person who used it. But following the Western way of thinking, numerous uses were contained in the one building. The first floor was a waiting room for servants, the second floor, a reception area, and the third, the residence of Emperor Gojong. However, the building was rarely used.

After Korea gained its independence, a US-USSR joint commission was held here to discuss the establishment of the Korean government. After the Korean War, it became the National Museum and then the Royal Museum. Currently, it is undergoing restoration. 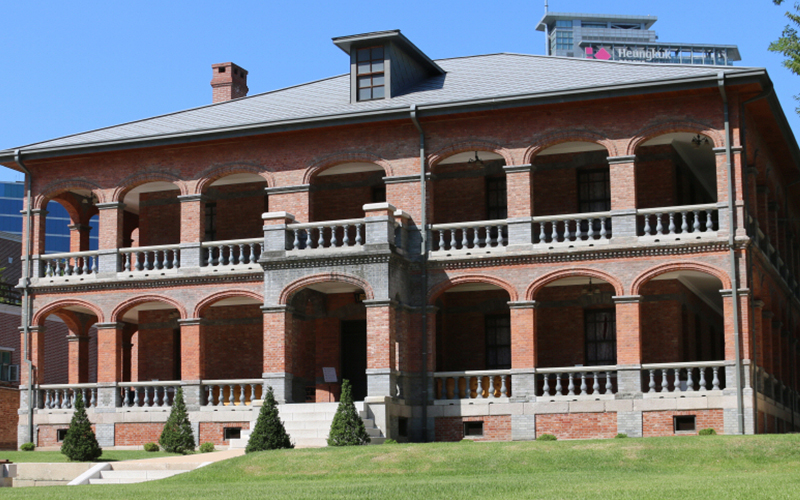